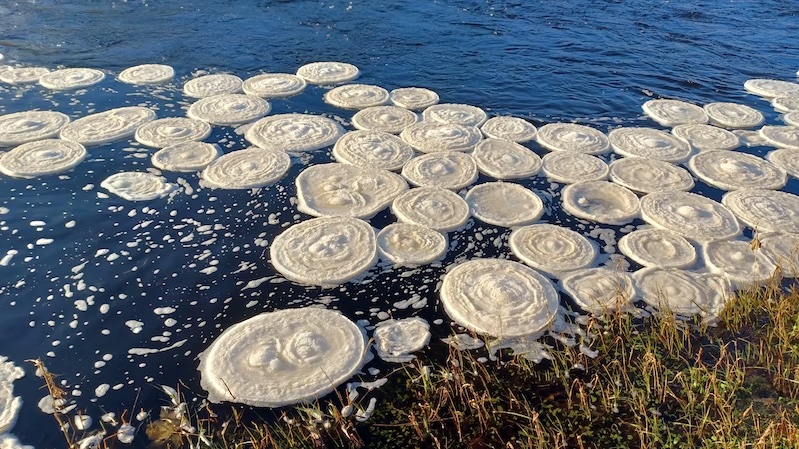 Stunning “ice pancakes” swirl on the surface of Scottish river

In December, strange ice floated on top of the River Bladnoch. It happened in Wigtownshire, Scotland. The ice looked like perfect circles. People call it ice pancakes.

Callum Sinclair spotted them on the river. He shared a video. It shows the icy circles bumping into one another. They were being washed downstream by fast-moving currents. Water moving in a river is called a current.

Frozen Foam Trapped In A Current

On rivers, ice pancakes start with frozen foam. It gets trapped in an eddy. This is a type of current. Water moves in a circle in an eddy.

The eddy pushes the frozen foam. This forms a circular shape. Then, other bits of ice hit the disc. Foam and ice freeze to the circle. The pancake grows larger and larger.

On open water, the pancakes form differently. First, cold weather creates a layer of ice. Water currents and waves break it apart. It breaks into chunks. The icy chunks crash into one another. This creates round edges. That’s how the ice gets its pancake shape.

Ice pancakes can be as small as frisbees. But they can also grow large. They can be as big as dining room tables. Ice pancakes look solid. But they’re often slushy. They easily break apart when lifted from the water.

The Great Lakes of North America get ice pancakes. So do the oceans around Antarctica. But ice pancakes are rare in United Kingdom rivers. That’s because it’s usually warmer. The weather was really cold in December 2022. That cold snap was unusual. Temperatures fell to below freezing. It stayed that cold for more than a week.

Skip back to main navigation